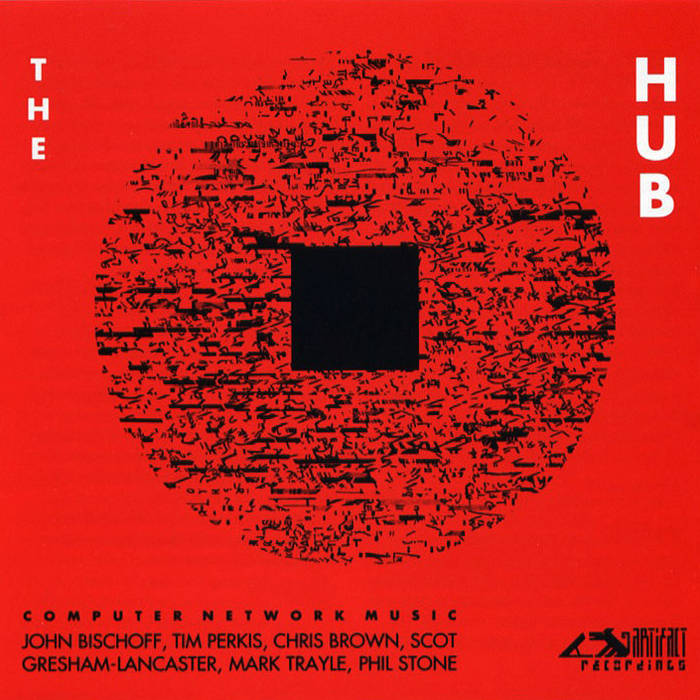 The Hub is a computer music band whose members are all designers and builders of their own hardware and software instruments. The group electronically coordinates the activity of their individual systems through a central micro-computer, The Hub itself, as well as manually through ears, eyes, and hands.

The Hub originally came about as a way to clean up a mess. John Bischoff, Jim Horton and myself played for several years in a group called The League of Automatic Music Composers, the first microcomputer network band. Every time we rehearsed, a complicated set of ad-hoc connections between computers had to be made. This made for a system with rich and varied behavior, but it was prone to failure, and bringing in other players was difficult.

Later we sought a way to open the process up, to make it easier for other musicians to play in the network situation. The result was the Hub, a small computer dedicated to passing messages between players. It serves as a common memory, keeping information about each player’s activity that is accessible to the other players’ computers.

I see the aesthetic informing this work as perhaps counter to other trends in computer music: instread of attempting to gain more complete control over every aspect of the music, we seek more surprise through the lively and unpredictable response of these systems, and hope to encourage an active response to surprise in the playing. And instead of trying to eliminate the imperfect human performer, we try to use the electronic tools available to enhance the social aspect of music making.

All selections are live performances with no multitracking or overdubbing.

This work was made possible in part by grants from Meet the Composer/California, the National Endowment for the Arts and California Arts Council.