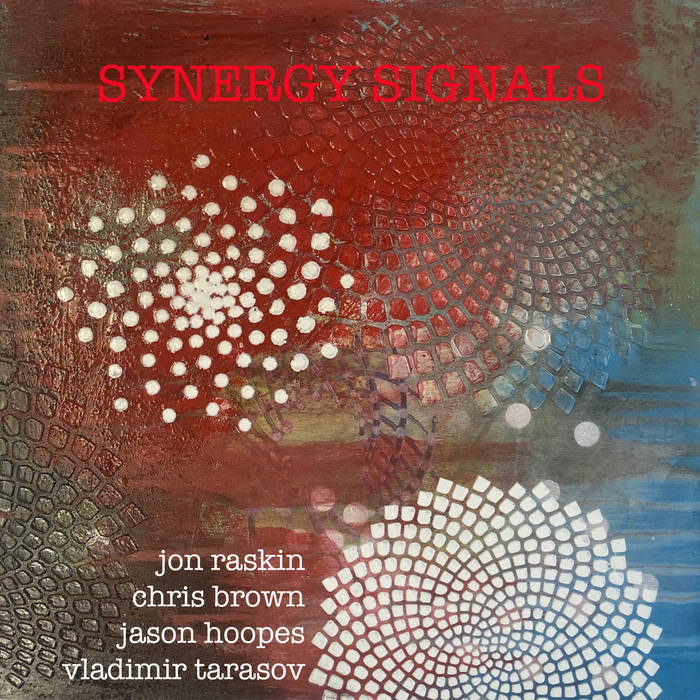 SYNERGY SIGNALS is the first album from a quartet active for several years in the San Francisco Bay Area: Jon Raskin (saxophones), Chris Brown (piano and electronics), Jason Hoopes (electric bass) and the eminent Lithuanian drummer and percussionist Vladimir Tarasov. The album reflects the multi-stylistic experience of its members in jazz, classical, rock, folk, experimental and electronic genres, while innovating a freshly original style of its own.

JON RASKIN has been a member of Rova Saxophone Quartet for the last 42 years exploring the relationship of improvisation and composition, developing and honing the language of ensemble music and researching linguistic possibilities of the saxophone. He has performed and/ or recorded with Anthony Braxton, Fred Frith, Sam Rivers, Tim Berne, Phillip Johnston, Leo Smith, Frank Gratkowsi, Phillip Greenlief and Henry Kaiser. Highlights as a member of Rova include composing a collaborative work for SF Taiko Dojo/Rova”, composing music for Mr. Bungle/ Rova, organizing the 30 year Anniversary Concert of John Coltrane's Ascension, performing the music of Miles Davis at the Fillmore with Yo Miles! , the Glass Head Project with Inkboat and the ongoing Electric Ascension Project. Besides over 40 recordings with Rova, Raskin's recording experience include Anthony Braxton, Eight (+3) Tristano Compositions 1989 For Warne Marsh (1989) and The Bass & the Bird Pond with Tim Berne (1996).
www.jonraskin.com

CHRIS BROWN, composer, pianist, and electronic musician, makes music with self-designed sonic systems that include acoustic and electroacoustic instruments, interactive software, computer networks, microtonal tunings, and improvisation. His compositions are designs for performances in which people bring to life the musical structures embedded in scores, instruments, and machines. Throughout his career he has composed solos for acoustic instruments with interactive electronics, and for computer alone, using software he writes for his compositions and improvisations. Recordings of his music are available on New World, Tzadik, Pogus, Intakt, Rastascan, Ecstatic Peace, Red Toucan, Leo, and Artifact Recordings. He has also performed and recorded music by Henry Cowell, Luc Ferrari, José Maceda, John Zorn, David Rosenboom, Larry Ochs, Glenn Spearman, and Wadada Leo Smith; as an improvisor he has performed and recorded with Pauline Oliveros, Fred Frith, the Rova Saxophone Quartet, William
Winant, and Frank Gratkowski, among many others.
cbmuse.com

JASON HOOPES grew up in the mountain region of Humboldt and Trinity counties in Northern California. He began his musical life as a self-taught guitarist and bassist. He earned a Master of Arts degree in Music Composition, and a Master of Fine Arts in Music Performance & Literature, at Mills College, Oakland, studying with Fred Frith, Joelle Leandre, Muhal Richard Abrams, Zeena Parkins, Roscoe Mitchell, Helmut Lachenmann, and India Cook, among others. With drummer/percussionist Jordan Glenn he is a member of the Fred Frith Trio and is also a member of Jack O' The Clock, the brainchild of composer Damon Waitkus.
www.jasonhoopesmusic.com

VLADIMIR TARASOV was born in Archangelsk, Russia. and since 1968 he has lived and worked in Vilnius, Lithuania. For many years Tarasov performed with the Lithuanian Symphonic Orchestra and other symphonic, chamber, and jazz orchestras in Lithuania, Europe and the USA. From 1971 to 1986, Tarasov was a member of the well-known contemporary jazz music trio – GTC (Viatcheslav Ganelin, Vladimir Tarasov, Vladimir Chekasin). With the Trio and many other artists and orchestras he has recorderd more than 100 records and CDs including numerous solo performances. Mr. Tarasov has performed with such musicians and artists as Andrew Cyrille, the Rova Saxophone Quartet, Anthony Braxton, Lauren Newton, and Josef Nadj.
www.vladimirtarasov.com